Long considered, an underutilized security asset the Andaman and Nicobar islands have come into the forefront in recent years, amid tensions between India & China. Until now, the island chain has suffered from underdevelopment due to environmental preservation and tribal welfare. But a ten-year plan to expand the infrastructure of Andaman & Nicobar Island has been laid out. The development will not only make the archipelago a tourist destination, but the military aspect of the development will increase India’s geopolitical leverage in the Indian Ocean region.

Often called India’s “ unsinkable aircraft carrier” to the east, Andaman & Nicobar islands house the only tri-service command of India. Strategically located, the islands are larger than several island countries & are an asset in Indian’s defence & strategic calculus. The northernmost part of the archipelago is only 22 nautical miles from Myanmar. While the southernmost part (Indira point ) is a mere 90 nautical miles from Indonesia. the islands (572 in total) are located by the confluence of the Bay of Bengal. End to end the Andaman & Nicobar islands is well over 800km in distance. The chain straddles Duncan’s Passage & the 10-degree channel. Also, the Preparis channel(north) & 6-degree channel (south) are located by the island chain.

Like much of the world’s problem has a root cause consisting china, recent prime attention given to Andaman & Nicobar Islands is also due to Beijing’s assertiveness. China has steadily expanded its maritime presence in the Indian ocean. The Chinese use the alibi of anti-piracy operations for deployment of PLAN (People’s liberation army navy ) submarines in the region. In the guise of anti-piracy, the Chinese seek to collect vital information about the underwater operating environment. An egregious example was the deployment of a submarine which berthed in Colombo in Sri Lanka in 2014, on its way for so-called anti-piracy operations. In mid-2016, the Indian naval authority said that they were sighting Chinese submarines 4 times every 3 months on average. China has also steadily enhanced its operational Turnaround [OTR] in the Indian ocean.

Recently, a Chinese vessel trying to extensively map the Indian Ocean region was caught by Indonesian maritime security. The ship was intercepted near the Sunda strait, making way towards the Indian Ocean. In August 2019, the Indian Navy intercepted & expelled a Chinese vessel 460km east of Port Blair. A part of its mission was in the Bay of Bengal. It also deployed the Chinese underwater gliders “Sea Wing” in the Indian Ocean. These underwater drones were also found near the Makassar Strait. These drones collect seabed data & other critical information useful for submarine navigation & warfare.

Coupled with the above instances is Chinese engagement with littoral countries of the Indian Ocean Region. Chinese have developed a naval base in Djibouti(Horn of Africa). Gwadar (Pakistan) & Hambantota (Sri Lanka) has been virtually seized by Beijing. In Cox’s Bazar(Bangladesh) billion-dollar Chinese submarine base is to be constructed. And China has been eyeing Myanmar (kyaukpyu port ), Thailand(kra canal) & Malaysia to extend its BRI Projects. China has been on an overdrive to gain prominence & resolve its “Malacca dilemma” in the Indian ocean.

To protect the Indian ocean region, various naval air stations are positioned in the Andaman and Nicobar Island chain. Recently, INS kohassa (shibpur, north Andaman) was commissioned.This was the 3rd naval airbase. Also, previous naval bases like INS Baaz( campbell bay , Greater Nicobar) are going to get upgraded. This will house & support operations of larger aircraft. Other important developments include:

Earlier developments, though effective, have been criticized to be inadequate considering Chinese growing prowess & belligerence. That’s why the Indian government has planned to bolster the Andaman & Nicobar island further with more fighter aircraft (in the vicinity ), troops, and other defence assets. Various proposals are being processed like:

a. Positioning a fleet of naval warships with Landing Platform Docks (LPDS).

India has been supported in its efforts to counter China in the Indian Ocean region. While regional navies of S.E Asian countries have been making regular visits to Port Blair, major navies of the US, Australia, Japan & France have shown cooperation, with various exercises near the Island chain. Royal Australian Navy (RAN) has been participating in MILAN exercises ever since 2007. Japanese flotilla of minesweepers had visited Port Blair in 2011. French (Logistic support ) Naval ship Var, & Royal Navy flotilla(of United kingdom ) have also paid a visit in 2006 & 2007 respectively. But these visits have been sporadic & been kept low key with limited publicity. Also Indian Navy has always been reluctant to an extensive partnership in the Indian Ocean. Because it would mean sharing critical undersea information with other naval power, which New Delhi has been reluctant of. However, this might change in the coming years.

Now, the US & Japan have a robust collaboration in strategic Anti-submarine Warfare (ASW) in the Pacific through a combination of a sound surveillance sensor (SOSUS) network called “Fish Hook”. In recent times, there have been talks to integrate the “Fishhook” network with India’s undersea sensor chain. India, Japan, Australia & the US are suggested to collaborate for such a system in the Indian ocean.

There have also been talks of collaborative deployment of Long Range Maritime Patrol (LRMP) aircraft from India’s Andaman to Australia’s Keeling (cocos) islands. These measures will seek to monitor Chinese misadventures in the South China sea & Indian ocean Region.

Development, both military & economic, of Andaman & Nicobar island have been neglected in the past. This was due to reasons like tribal welfare, environmental preservation & partly not to spook the littoral counties with heavy defensive deployments. But times are changing. China is ever-present in the Indian ocean region violating not just India’s but other nations’ sovereignty as well. India is more than capable to rival the Chinese. But the cooperation of other nations is a welcome one. In the big scheme of things, Andaman & Nicobar is the ace in the hole for India. The Island chain is important for its strategic role in promoting the Act East policy of India. Andaman & Nicobar Islands with proper development can be a defense multiplier in the Indian Ocean region. The island chain can help achieve India’s vision of a free, open, inclusive rules-based Indian ocean & Pacific ocean.

World War III: Is It Near? 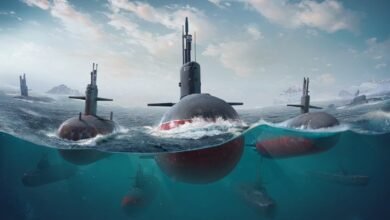 Rafale M Vs TEDBF: A Comparison