Hello defence lovers! Recently the Indian Airforce demonstrated an Elephant walk with 75 fighters in Ambala Airbase to commemorate ‘Azadi Ka Amrit Mahotsav‘. These 75 fighters consisted of 25 Dassault Rafale and 50 Jaguars. This is perhaps the biggest elephant walk in entire South Asia by any airforce. In this article, we are going to analyse the significance of this Elephant walk and the tactics involved behind it.

What Is Elephant Walk?

Elephant walk is a term used by the US Airforce for taxiing a large number of aircraft together prior to a minimum interval takeoff. We often see US Airforce F 16, F 22, F 35, A 10 displaying such walks. Even the large transport aircraft, tankers and bombers also sometimes perform this walk.

The term elephant walk originated during the Second World War when the allied bombers conducted raids containing thousands of bombers. Those who observed this event said that the taxiing of these large numbers of aircraft to take off in single file in nose-to-tail formations said that they looked like elephants walking to the next watering hole. Not only bombers, during the second world war a large number of fighters also used to take off one after another in large numbers after performing elephant walks. This tactic was used to launch a large number of aircraft into the air in the minimum possible time.

Over time the tactic changed significantly. In the modern era, US Airforce practices Minimum Interval of Takeoff where all the bombers and tankers at an airbase take off one after another with the interval of 12 to 15 seconds. This tactic is practised in the simulation of a nuclear strike on the airbase where all the assets have to be made airborne before the entire base is obliviated with the nuclear strike.

Now let us look at the tactical use of elephant walk for the fighters. The most significant tactical use of this walk is that it can be used to launch a large number of fighters in a very small time. In such formation, there are small groups or packs of fighters that take off simultaneously. Often a pack or group contains 2 or 3 fighters. There is a very small amount of time between the takeoff of two successive packs. In this way, the entire squadron can be made airborne in a short duration which can then overpower any enemy formation with their sheer number. Engaging with such a huge formation is often demotivating for the enemy. The enemy air defences are also saturated with targets. And these targets are not sitting ducks, these can fire back.

But there are also certain drawbacks. These are mostly used for psychological warfare only. Such a huge formation on the tarmac is good for intimidating the enemy psychologically but is quite vulnerable to enemy air attacks. Few cluster bombs can wipe out the entire squadron.

IAF has done the elephant walk to commemorate the 75th year of independence. The formation had 75 fighters (25 rafale and 50 jaguars) signifying 75 years of independence. But this event has many silent messages for our enemies. The formation shown is a deep strike package. The Jaguar Fighter bombers are a potent platform for bombing the enemy along with the Rafales which are the best fighters in the entire subcontinent. It symbolizes that such huge firepower is ready to strike the enemy anytime if required. This deep strike package can be used in massive retaliation if “Terrorist Factory” attempts any misadventure. The message is also for the Taliban as the US has pulled out its last soldier. It is also for those who are thinking that the Taliban will help them liberating Kashmir and after seeing this they will probably having nightmares. The message is also clear for the Chinese which says “don’t mess with us and don’t underestimate our power”.

This is the first time the Indian airforce has conducted such an Elephant walk. Earlier it was avoided due to the fact that Russian engines are very prone to foreign object damage and performing it with the Russian fighters is risky. That is the primary reason why there are rafales and jaguars instead of Su 30 MKI.

This elephant walk also reminds us that though we are a peace-loving country, we can demonstrate our destructive power if provoked to do so.

Understanding The Export Potential Of Tejas To Australia 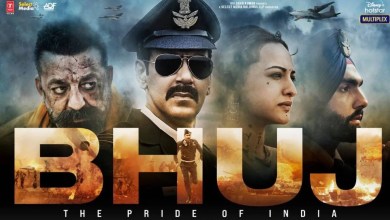 The Real Story Behind “Bhuj: The Pride of India”